As she faced out to sea, the splash of the currents moved up against her. Her eyes steadily surveyed the horizon…beyond that horizon lie the continents of Europe and Africa. Many a sailor had called out to her, many a voyager had whispered a greeting, many a peasant had sighed her name.  She longed to embrace all men, women, and children who gazed upon her face. Her presence was a gift to all, and she longed to care for those who sought her ideals. Yet, she was married to no one. 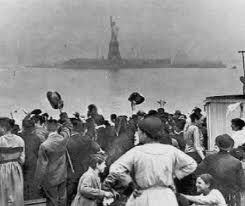 In 1906 and 1912, she was the basis of the welcoming committee for my grandparents. Hers was the first face they saw in America…this grand lady who embraced them and called them forward. Committed to serving and enlightening, she welcomed my father’s family to her shores. Thank you, Lady Liberty.

For this week’s prompt, I played very, very loosely with the words. When I searched my family tree, I could not find a maiden aunt from the last two and one half centuries. (Yes, really.) So…I saw Lady Liberty as an unmarried woman who was committed to her calling. Forgive me if the connection seems so farfetched.